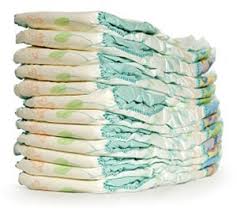 The great nappy debate for new moms starts way before they actually have their baby!

It’s long been laboured over – no pun intended – as kind hearted, well meaning moms, grandmothers, aunties and friends ask whether or not you’re going green in the nappy department. Terry towelling or disposables?

New mothers and mothers to be have so much to consider – breast feed or bottle feed, colour of the nursery, crib next to your bed or cot in the nursery, pram or buggy, swaddled or loose covers? Everyone has something to say.

Here are some of the facts we’ve unearthed about the great nappy debate. We hope it helps.

2. Disposable nappies for new borns cost from about £4 a pack of 24 up to £33 for bulk packs. They average 15p per nappy which means you’ll spend around £54 a month on disposables from the day your baby is delivered.

3. Terry towelling nappies cost around £5 for a basic 3 pack online up to £40 for ImseVimse Organic Cotton Terry Nappies that are shaped and colour coded!

4. The biggest issue with disposables is the disposing! You still have to put the waste down the toilet and then seal them up before putting them in the bin. With terry nappies you can use a flushable nappy liner that makes disposing of the waste easier and leaves the nappy cleaner to wash out and reuse.

5.  Terry nappies require thorough cleaning! You will need to use Steri-nappy or another steriliser to soak your used nappies in.

6.  If using terry nappies you may want to buy more absorbant liners for the night time as you won’t want to be up and down changing baby all night! YOu can buy these and nappy liners online in bulk to keep the costs down.

7. Terry or cloth nappies are the way to go if you’re concerned about the environment. What ever way you dispose of disposable nappies they are not ever really disposable.

8.  Disposable nappies can take around 200 years to naturally degrade.

9.  Cloth nappies need to be washed at high temperatures to kill bacteria which uses energy too.

10. Each baby will use around 4000 disposable nappies before they are potty trained.

What ever you’re told, you will decide what is right for you and your new baby. Be comfortable with your choices before the birth and let others around you know your decisions so that you won’t be easily swayed after the birth.