Have you ever wondered where the teddy bear came from? Who came up with the idea?

Here is a brief history of the teddy bear, how two different people came up with a similar idea at the same time but thousands of miles apart. This is how the teddy bear was born.

The teddy bear is a soft toy in the shape of a bear. 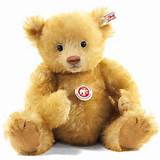 In 1903 in Giengen, Germany, Margarete Steiff made toy animals out of felt in a small factory. Richard Stieff, her nephew made a visit to the Stuttgart Zoo and did a sketch of the bears. He then requested Margarete make one from felt.

She made it out of brown mohair pile fabric and made the head, arms and legs move independently so that the bear could sit or stand. The teddy bear was then given shoe button eyes and an embroidered nose to try and make it look friendlier. Richard took the bear to a toy fair in Leipzig, Germany were a buyer from George Borgfeldt & Company in New York ordered 3,000 bears to be sent to America. Although the bears were produced there is no record to show them arriving in America.

The Steiff bear is now one of the most famous teddy bears with thousands produced every day.

At the same time a cartoonist named Clifford Berryman drew a characterization of President Theodore Rossevelt with a bear cub he had refused to shoot. The cartoon appeared to make the bear cub look cute and fluffy and could be seen in newspapers in November 1902.

Morris Michtom saw the cartoon of the President and asked his wife Rose to make a ‘Teddy Bear’ to sell in his shop in Brooklyn, New York. The Teddy Bears were made to honour the President and were known as the Michtom’s bear, which later was known as the Morris bear. These bears look very similar to the Steiff bears and have movable joints, button eyes and felt claws.

Due to the poor communication across the world neither Steiff or Michtom would have know that there was another form of the teddy bear out there.

By 1907 other manufactures had started to reproduce the teddy bear and almost one million bears had been sold.

Today the Morris Bear and The Steiff Bear are very collectable and there are many teddy bear museums around the world.

This article was written for www.thecuddlebox.com by Sue Thomas.