Nursery rhymes have been part of our childhood for centuries. They form a key part of early learning sessions between adult and child. Most children love being told nursery rhymes. Often the one where the very young child can join in some form of movement to the rhythm of the parent’s voice are especially attractive.

For instance Twinkle Twinkle Little Star is a great nursery rhyme for hand movement and the children love to imagine the star as a diamond in the sky. 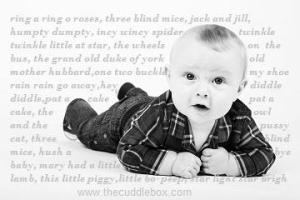 How I wonder what you are

Up above the world so high

How I wonder what you are

and then getting smaller as the rhyme says’

This is also a great bonding session between the young child and the parent, who can see that there is a healthy physical and mental interaction.

But where have they come from?

The first nursery rhymes can be traced back to the fourteenth century.

Are they real historical events or pure fantasy?

Some nursery rhymes don’t seem to carry a particular message at all, but convey a macabre sense of humor.  However those which have a link to an historical events sometimes portray events through nursery rhymes even after most are long forgotten.

For example Ring a Ring o Roses, the result of the Bubonic plague, is hardly the sort of thing that you would normally consider discussing with your young child, but put into the form of a rhyme and actions which stimulate the child’s responses it makes a fun thing to do.

Not all are purely historical, for example Hey Diddle Diddle the Cat and the Fiddle reported to be from around 1765 and said to be a take from a Shakespearean work is much more fanciful and just good fun.

But for us today with these and many others, the main point of these rhymes is that they are a doorway to interaction with our young children in a simple but effective way.